Livestreaming the sounds of morning: I went to SoundCamp for International Dawn Chorus Day

It was just a bit after 4:00 a.m. in London and jet lag was thankfully working in my favor.  With my digital audio recorder in hand and some serious bedhead, I wandered out of my tent to the meeting spot ready to begin the main event: a sound walk around the park at dawn. The light was dim and everything was covered in a fresh layer of morning dew. Us soundcamp-ers seemed to be the only ones in the park that early. We had split into two groups according to physical ability. A local nonprofit had arranged for a bunch of local elderly folks to join the dawn chorus walk, including a couple people with little to no vision but good hearing. Stave Hill Ecological Park was home to quite the forest for being right in the middle of the city, and the dawn chorus that morning was subtle yet beautiful, like the birds and us were slowly waking up at the same time.  Well, except for the ornithologist leading our walk, he was awake and ready in his element.

I’d come to soundcamp alone and was by far the traveler from farthest away. With a growing interest in sound studies, I had come across SoundCamp’s website and decided to come to their mainstay event in Rotherhithe, London, on Dawn Chorus Day weekend last May of 2017, with funding from GC Digital Initiatives to make my trip possible. I’m writing this post to share some of that experience and some resources for those curious to host their own soundcamp, wherever they’re planted. 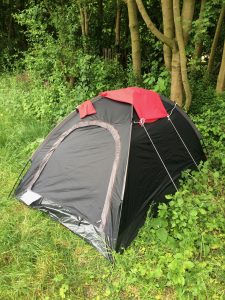 International Dawn Chorus Day is a day of appreciation for nature’s chorus of birdsong and other sounds during the sunrise.  It is celebrated by a handful of birders, environmentalists and sound artists and scholars the first Sunday of May each year – particularly in England, where it first began in the 1980s. This seems fitting given that “greenery of all kinds, especially gardens, have been central to both English sense of place and English sense of self… for centuries” (Jackie Brown, Dropping Anchor Setting Sail, 2005, pg. 11 citing Peter Ackroyd, Albion: The Origins of the English Imagination, 2002).

So, on International Dawn Chorus Day, radio stations and streams share the sounds of the dawn chorus as they happen for folks to listen in. But, the best way to celebrate – for those willing and able – is by camping out. The event I attended is organized by a small not for profit arts organization based in London, known as SoundCamp, which encourages folks to do just this.

What they’ve dubbed a “soundcamp” is an outdoor event where people camp overnight the Saturday before International Dawn Chorus Day, tune in to a live broadcast, and wake up around 4 a.m. that first Sunday of May for a nature walk to listen, record, and share the local dawn chorus in real time.

SoundCamp has been hosting their own soundcamp in London since 2013, and each year runs a live 24-hour broadcast on Reveil Radio tracking the sounds of daybreak as they emerge from audio live-streams set up by collaborators in various corners of the earth, which last year ranged from the US to Tasmania to Italy to Slovenia to Korea.  (Reveil also runs a year-round soundmap of live-streams here).  They encourage others to also “set up a shelter, tune in to the broadcast, and share the sounds of your location with the network,” and have even made guides for folks to follow for setting up a soundcamp and setting up a livestream into their Reveil station. 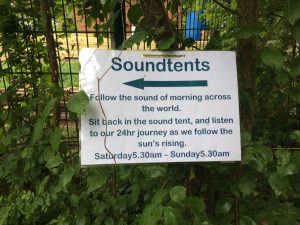 Kelsey’s photo, a sign at soundcamp: “Soundtents ← Follow the sound of morning across the world. Sit back in the sound tent, and listen to our 24hr journey as we follow the sun’s rising. Saturday 5.30am – Sunday 5.30am,” Stave Hill Ecological Park, London, UK, 2017

The soundcamp I attended last year at Stave Hill Ecological Park was very much a community event – families, couples, and groups of friends were all in attendance.  Various workshops on Saturday, from weaving to foraging, kept young kids entertained. A few sound artists performed too and there was a sound walk with (electronic) crickets and another to listen to the park’s bats at night. A chef also sold delicious home-cooked and partially foraged vegan food for cash throughout the day at the park’s community center.

The listening experience of Reveil’s 24 hour broadcast of dawn choruses was also rather community-oriented.  Two large canvas tents, known as “soundtents,” were set up with a few speakers playing the broadcast placed around each tent’s round inside edges, and blankets covered each tent’s floor.  The placement of numerous speakers inside the enclosed space of a tent provided a more focused listening space that was still shared – a nice alternative to the more individuated listening experience of using headphones.  Soundcamp-ers or park-goers could drop by the soundtents at any point during the event and listen in.

This trip was my first time traveling solo, let alone camping solo without cell phone service, and I was a bit “in my head” the whole while.  While I really appreciated the community-friendly aspects of soundcamp, it was also a bit strange to be there as an individual from far out of town. When my mind wandered, I kept writing down a series of contradictions I found striking: nature / digital, preservation / intervention, listening to birdsong / quieting of human voices, open mic livestreams / surveillance, mediated listening of elsewhere / un-mediated listening of right there (see more on sound studies and ethics in an interview I recently did with Dr. Roshanak Kheshti for SSRC’s Parameters site here).  Nonetheless, it was still very calming to be outdoors all weekend listening to the sounds of forests and parks in various digital and natural forms.

After I flew back across the pond to return to NYC, we – GC Digital Initiatives (GCDI) – ended up beginning an entire series of talks and workshops related to sound analysis, production, theories and methods during the 2017-2018 academic year. (You can learn more about the GCDI Sound Series here and its background here.)  And we invited someone that one of SoundCamp’s main architects—sound artist and scholar Grant Smith—who came highly recommended to me to be an invited speaker for the series: New York area media artist, educator, and maker-of-things Zach Poff, who actually hosted his own soundcamp at Wave Farm in Acra, NY, last year too.

In closing, I want to note that I am writing this blog post belatedly but with intention: next Sunday, May 6th is International Dawn Chorus Day! Anyone inspired to set up a soundcamp or soundtent or dawn chorus walk? I recommend doing it with friends and coffee.