Why Do I Need Qualitative Data Analysis Software?

I’m a PhD student in Business (Information Systems), and I employed qualitative research methods in two of my previous projects to analyze interview data of commercial ERP system implementation and speeches of CEOs from public firms. Qualitative data analysis is a useful and powerful research method that includes the human encoding and description of texts to surface patterns; whereas, quantitative methods such as econometric modeling, machine learning, and natural language preprocessing are computationally, or numerically, driven.

Solely relying on quantitative analysis can sometimes miss the broadness and depth of the information we try to analyze. For example, it reduces social complexity and has weaknesses in building theory and identifying new patterns. Additionally, numbers sometimes present an illusion of precision, adding bias and losing the perspective of the people that the research tries to understand. As a social science researcher with a statistical background, I personally prefer a mixed-method approach, whereby both qualitative data analysis and quantitative methods are employed to propose a theoretical model and then validating the corresponding hypotheses.

If you are interested in using a mixed-methods approach but want to avoid expensive and proprietary licenses, your software options are limited. In the following post, I will introduce one possible option called RQDA, a free qualitative data analysis software based on the R programming environment.  First, I will give you a brief guide on how to install it, and then show you how to get started using it.

RQDA is a R package for Qualitative Data Analysis that works on both Windows and Mac Os platforms. I became a RQDA user when I started a project that required qualitative data analysis of interview transcripts. The project aimed to investigate why users are resistant to use a commercial ERP system that was newly deployed in a large organization. I conducted a series of interviews with key employees in different positions inside an organization and tried to develop hypotheses from the interview data. Like many other qualitative research projects, my aim was to either connect this case to existing theory or build a new theory to explain users’ behavior in the organization. Then, the first challenge I was facing was to find a Qualitative Data Analysis (QDA) software that could enable both synchronous and asynchronous team collaboration of qualitative coding and data management.

After much research, I finally chose RQDA for three reasons:

Something you should consider before you start using RQDA: the developer stopped maintaining the software in early 2020 for unknown reasons. The old releases are still functional, but we don’t currently know whether the software will be further developed in the future. Even though its development has been discontinued, its capabilities can fulfill most qualitative analysis requirements and it is thus still a highly recommended tool for completing qualitative research projects.

First, you need to install R and RStudio. You can find the instructions on how to proceed with the installation here. When you install R, make sure you are selecting the R 3.6.3 (2020-02-29) release, as the newest R version (4.0.2) no longer supports RQDA. Please, also be advised that you can install multiple R versions on your computer (both Windows and Mac can do that), as well as in RStudio. You can switch between different R versions in RStudio conveniently by clicking the tab “Tools” and choose “Global Options.” Then you can click on “Change” in the “R Sessions” to select the one that you want to use. 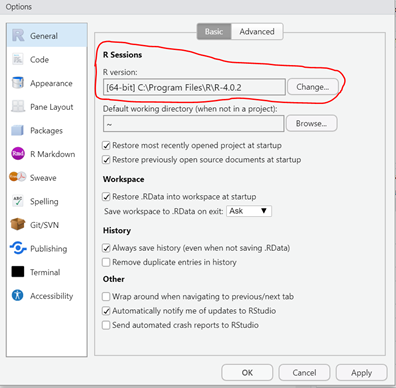 Switch to different versions of R in RStudio

You will then have to install RQDA. Below is a simplified step by step tutorial to do so. You can also find more detailed documentation on my personal GitHub RQDA repository. I made two versions, for Windows users and Mac users separately, which are almost the same except that GTK+ software has a different format for Windows and Mac as well as Mac does not need to install Rtools. I will introduce the case for Windows in this article.  For Mac users, you can check out the Github page and find out the step-by-step tutorial, which is very similar to the one for Windows users. There is another Mac user who shared her experience of successful installation in Oct 2020, check out this Github link for the step-by-step details.

After installing Rtools35, run the following command in RStudio

You can copy-paste the four folders you just downloaded into your personal R library. Use the R command

Congratulations, you have now successfully installed RQDA in the R environment on your computer. Run the following commands to launch it,

Interface of RQDA in RStudio

A GUI of RQDA will then pop up in RStudio. Now, you are ready to go! For information on how to do qualitative coding in RQDA, you can refer to this detailed tutorial. This tutorial will walk you through the qualitative coding features in RQDA step by step and show some interesting examples of visualizing codes and categories. Moreover, it provides demos of useful RQDA functions for organizing and searching the coded files and memos.

At last, RQDA is an open-source (free) package in R and offers all the functionalities as a Qualitative Data Analysis program. I’ve used it in two of my projects instead of Atlas.ti and would recommend it in any process involved with qualitative analysis. Furthermore, the coded data could also be piped into other text analysis models in the same R working project easily.

If you have any questions regarding RQDA and its use, do not hesitate to join us at the RUG (R User Group) meetings, the DVG (Data Visualization Group) meetings, or to schedule a consultation with the GC Digital Fellows.