Note: An interactive version of this tutorial is available at https://connor-french.com/post/leaflet-tutorial/

Making a data visualization interactive opens up a host of opportunities for new insights. This is especially true for geographic data. While a static map is preferable for publication in a journal or a book, an interactive map is suitable for exploring data or packing more information in an accessible format. Patterns may emerge when viewing data at different scales or when toggling through features.

There are a number of tools for building interactive maps. Leaflet is one of the most popular open-source JavaScript libraries for creating interactive maps. The leaflet R package is a high-level interface that makes it easy to create beautiful interactive maps in a few lines of code. Using R rather than point-and-click software like ArcMap and others makes your life easier through reproducible code that can be shared for others to recreate your map or that you can return to when you inevitably need to fix something. I use leaflet regularly for data exploration and for sharing preliminary results with collaborators. You can also include leaflet maps in RMarkdown documents, Shiny apps, and even post them to your website!

Goal of the tutorial

The goal of this tutorial is to provide you with a basic understanding of leaflet functionality and the tools and resources to make your own interactive maps. You will:

You will need to install four packages for this tutorial. The dplyr package for data manipulation, the sf package for handling spatial data, the rgbif package for acquiring the data, and finally the leaflet package for mapping. All packages are available on CRAN.

Now that the packages are installed, you need to load them into your environment.

Read in and pre-process data

The data you’re going to work with are some locations where rain frogs, genus Breviceps (aka the cute grumpy frog), have been found. Using the rgbif package, you’re querying the large Global Biodiversity Information Repository to obtain the species occurrences. After obtaining the data, some filtering is necessary. First, you’re filtering out observations that do not have latitude or longitude coordinates (hasCoordinate = TRUE) and selecting only the relevant columns for your visualization (select()). Then, you’re converting the data frame that rgbif returns into a simple features (sf) data frame that contains information about which columns to use as coordinates (coords = …) and what the data’s coordinate reference system is (crs = …).

If the %>% bit is confusing, don’t worry- I’ll explain in the next section.

Plotting a basic map only takes three lines of code! The necessary steps to make a leaflet map are:

The %>% (pipe) operator is used to make code easier to read and help the mapmaking process flow organically. It pipes the output of one function into the input of the next. Intuitively, you can think of the following code as “I initialize the map widget and then add the basemap tiles and then add the locality markers.” 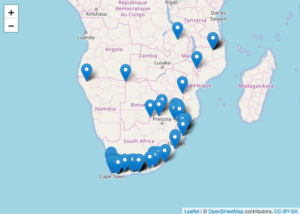 This is nice and all, but there’s more you can do to make the visualization informative and appealing.

Now you’re going to add some pizazz to the map. You’re going to color the labels according to the species and add some popup text with information about the family the individual belongs to, its species name, and the date it was collected. In addition, you’re going to use addCircleMarkers instead of addMarkers to use circles instead of flags. Finally, you’re adding a legend so the colors make sense.

Detailed explanations of what each function is doing are provided as code comments. 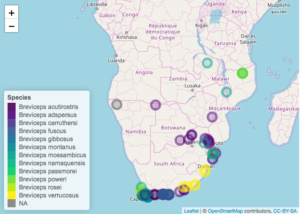 And there you have it! This is just the tip of the iceberg with what leaflet can do. You can plot polygons, lines, rasters, icons, and more with only a little more code.

Here are some more resources to learn more about leaflet and general GIS in R.

A more involved tutorial that shows off some more leaflet features.

Making static maps in R with sf and ggplot2.

My Tweets
Need help with the Commons? Visit our
help page Send us a message
Skip to toolbar